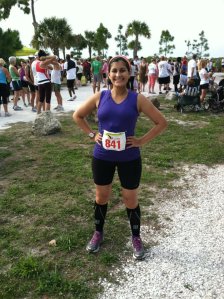 My first 5K was the Robinson Preserve 5K Twilight Run. As we were lining up we were told that this was the highest attended 5K in Sarasota and Manatee counties. Cool!

Let’s start from the beginning. (And I apologize in advance for lack of photos…I meant to take more, but was so wrapped up in everything!) Getting there wasn’t too bad. I expected some traffic since we were driving down during rush hour and we did run into some, but nothing too bad. We had to park in a field, which was around a mile away from the actual preserve. I didn’t mind this though since I needed to warm up anyway.

Getting my bib was easy. There were a few vendors, but I didn’t really walk around. Jon found a spot, I stretched and before I knew it we were being told to line up.

The race was done in three waves. Black was first, red was second and blue was third. I was in the red wave and I tried to be somewhere in the back since I wasn’t sure how fast some people were going to be going. I was a bundle of nerves and excitement all day so at this point I was ready to GO. Finally, the airhorn sounded and we were off!

We started right outside of the preserve, passed by cheering spectators (got to see Jon’s smiling face as I started) and started on the preserve trail. I tried to keep a steady pace in the beginning. I was trying to hold back excitement and not give my all too early.

This was my first time running with a huge group of people. I imagined people bumping into me, stepping on me, etc. but everyone seemed to have a great respect for one another. People moved out of the way when they saw you wanted to pass and it felt great running as a unit.

At the first mile marker there was a volunteer with a stop watch who yelled out 13 something…13 minutes? Really? Since my average pace is 10 minutes I started to worry a bit so I picked up the pace a little. I later realized that I should have taken a few minutes off of what she said since there was a whole wave that started ahead of me.

The first water stop came at the perfect time. I tried not to come to a complete stop and ended up catching up pretty well. The second water stop I had to skip because they had no cups ready. This sucked because I reallyc could have used that second cup to keep me going.

At one turn I thought we were near the end so I started pushing a little harder. Then after another turn I realized we still had a ways to go. Ugh! Finally when I saw the end in sight I gave all I could at the moment and pushed to the finish line.

What a great feeling! I found Jon and then made a beeline for the buffet that was set up. My stomach actually started to growl as I started the race, which was not good. I probably scarfed down the pasta and cesar salad a little too fast, but I needed it!

The preserve itself was very pretty. Of course with all the runners, no animals peaked their heads out, but it was still a neat running course. The only bad thing was that the trails weren’t big enough and it was hard to pass people. But overall, it was a great first race!

I wasn’t sure where to get my results and we wanted to head out of there to get to Cape Coral so I left hoping they’d send an email. Thankfully one popped up in my inbox yesterday.

I was recorded at 31:49, which was much better than I originally thought. I still wish I had made my goal of 30:00, but I knew that it being my first race and all the people that I’d probably fall a bit behind. They also posted photos, but not very many 😦 And no close ups of runners! I was really hoping for a race pic.

Now I got the bug! I’m looking up upcoming races…probably another 5K and then maybe onto a 10K?

To wrap it up I have to say that this is something that I wasn’t sure my body could do. But it did. I need to get back in my normal fitness routine. While training I was only running 3 days a week…no strength training. So I want to add that back in. I’ve seen and felt a difference in my body and I think adding strength training back in will hopefully get me to the fitness level I want to be in. I am an example though, that if you put your mind to anything you CAN do it. Especially something physical. Running really is a mental, as well as physical, sport. So many times I had inner battles in my head about whether to stop or not and I kept saying no, and telling myself I CAN do this. I used to hate running, but mostly because I didn’t think I was good at it. But I’ve learned it doesn’t matter if you’re good, it doesn’t matter how fast you go or who’s running faster than you…the important thing is that you’re doing it and doing it for you. I am so proud of myself for accomplishing this and can’t wait to keep going.

Last week was pretty uneventful besides me being productive on a freelance project. It involves interviewing local business owners and I’ve been loving getting to know a bunch of them. It’s so fulfilling to see what a tight knit and caring community we have here in St. Pete.

Anywho, my mom’s birthday was yesterday, but we celebrated last Friday. I took her for a yummy dinner at BellaBrava and to see Diana Ross at Mahaffey. BellaBrava is really growing on me. I never disliked it, but wrote it off as whatever American Italian food. But the service is always great there and the food is consistently good. Unfortunately we got seated next to a large party, but they were packed so no matter where we were it would have been noisy. That’s their biggest downfall. My mom got the Eggplant Parmesan Rollatini and I got the Chicken Picatta with mashed potatoes and green beans. Very good and a nice alernative to pasta. I also had a glass on Pinot Blanc, which I’d never heard of before, but it was very crisp and refreshing.

Diana Ross put on a great performance. The only thing I didn’t like was that she didn’t really talk to the audience like most performers. She didn’t even give a “thank you and goodnight”. Just did her last song and walked off. At first we thought she’d come back to do an encore like most performers, but when the lights came up and people started clearing the stage we knew that wasn’t going to happen. This was my first time seeing a show at the Mahaffey though and I loved it. Although our seats were in the second to last row we had a clear, full view. And the theater itself is very pleasing to the eye. Not a bad price for drinks either! 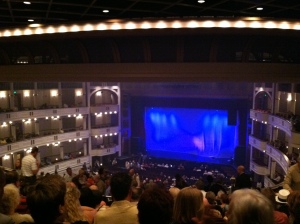 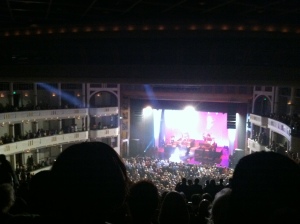 It was only 9:30 when the show got out so we headed to Old Farmer’s Creamery for some ice cream. This place is SO good and my go-to place for real ice cream. I tend to always get Superman (I’m such a five year old) but I was craving chocolate so I got Rocky Road. Mmm…they use real mini marshmallows too! I also always get a kids size. It’s the perfect size…you feel like you’ve satisfied a craving without feeling gross and that “oh my god did I just ALL of that?” feeling.

The next day I did a Junior League volunteer shift. Afterwards I called my friend Lora, who I needed to pick some stuff up from. Turns out she was out with some other lovely ladies having an afternoon cocktail so I decided to join them. 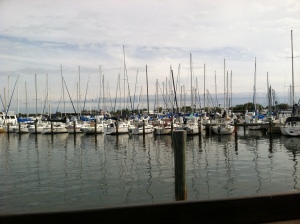 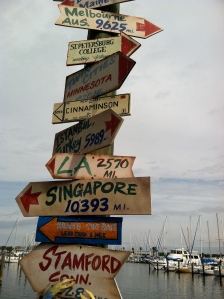 Yummy sangria overlooking the water at Fresco’s. Perfection. Except for the $9 value of that drink (!!!) 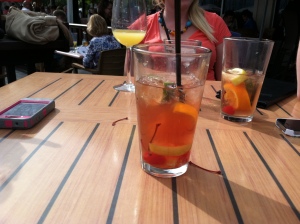 Later that night we headed to our friend Jan’s for Italian night. There was tons of pasta, chicken parm, turkey meatballs and wine. We were supposed to pop in a movie, but ended up chatting all night. How is it that always happens 😉

Sunday we were supposed to meet up with an out-of-town friend for brunch, but she ended up not being able to make it. We headed to brunch anyway! Red Mesa Cantina, another consistent fav.

We started with the dip trio which has guac, queso and black bean dip. I tried their new Duck torta, which was good but not as good as the roasted pork. I’ll never get enough of those yuca fries though! 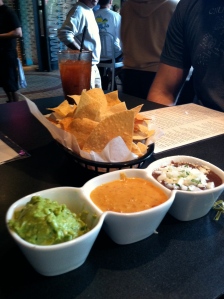 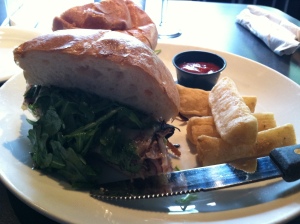 Enjoyed with a margarita 🙂 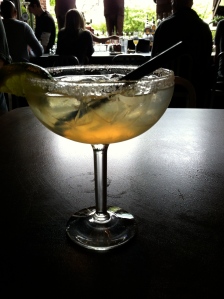 For dinner that night I got to taste Jon’s Italian Wedding soup. 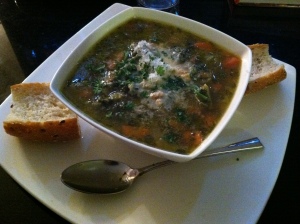 I get a free turkey from work every Thanksgiving and it finally made its way out of the freezer. Earlier in the week he made BBQ turkey legs… 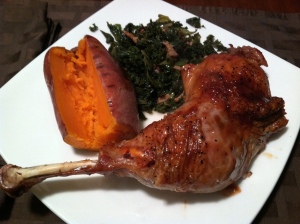 …with a sweet potato and kale with bacon. I know, I’m lucky. Then the turkey breasts got grinded for turkey meatballs and the bones went into a pot to make stock. Quite a lot of meals from one turkey!

Fast forward to yesterday, my mom’s actual birthday. We had her over and Jon made vegetable enchiladas with rice and refried beans. I love how I’ll set out to make something, he’ll say “want me to help?” and he’ll end up doing all the work…although we wouldn’t have been eating until nine if I had cooked 🙂 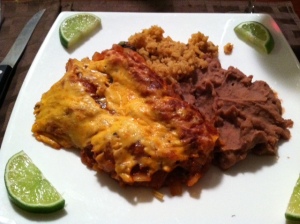 Plus carrot cake for dessert. A tip for getting rid of uneatten birthday cake? Bring it to work the next day 🙂

March is shaping up to be quite the exciting month. For one thing I signed up for my very first 5K!!! I’m so pumped and excited. I’ve been wanting to do one for a while now and finally sucked it up and registered. Training has been going well but I haven’t run a full 2 miles yet let alone 3. My goal is to run the whole time without stopping. It’s the Robinson Perseve Twilight 5K, which sounds really neat and pretty. Plus there’s a shindig afterwards.

What fun and exciting things do you have planned for March?