It’s been a pretty typical week. Meeting Monday. Got nails done yesterday with my mom and went out to dinner. Another meeting tonight.

Because I ended up working a lot of hours on Sunday I get to deduct some hours from my days this week. So when I got off early on Monday I thought I would make dinner. I wanted to try Iowa Girl Eats’ Caprese Lasagna with Spicy Turkey Sausage.

Ohh the adventures of Katie in the kitchen. I really should have someone film me cooking because I’m sure it’s quite hiliarious to the seasoned cook. From my chopping skills (or lack there of) to my sauce making. Instead of letting my sauce stay on the heat and get all nice and thick I turned off the heat and it stayed thin. When Jon saw me finishing off my assembling of the lasagna layers he said, “You know you’re supposed to break off pieces of lasagna to make it go all the way across if the pieces are too short.” Oops. Enter random leftover noodles being crammed into the sides so the lasagna wouldn’t cook weird.

I made the recipe just as it was written and I think it actually came out pretty good. I could have put more basil, but other than that it was good. A pretty simple dish. Jon and I both agreed some sort of green and mushrooms would have been an exciting addition. But since this is a caprese inspired lasagna I know it was meant to be simple and light tasting. 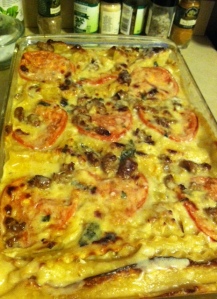 So I’ve kind of been ignoring running lately. Since I don’t have a race coming up I thought I could just take it easy. Plus I’ve been hitting up Fit for Fashion and enjoying the change up in workouts.

But there’s already been talks of fall races and I’m already officially signed up for one. It seems so far off, but in running time it’s really just around the corner. I was asked if I wanted to do the Hooters 2 Hooters run, which is in September and I jumped on board. Then I was trying to decide if I wanted to do the 5k or 10k. I’ve done two 5k races so far and would like to do a 10k at some point. I know I definitely want to do the 10k for my friend’s Race for the Cure team in October. So I’m thinking I’ll give the 10k a shot for the Hooters race and then really race for time for Race for the Cure.

Here’s a rundown of all the races I’ll be doing this fall:

October – Race for the Cure 10k

Ok, so now I have a goal of running my first 10k in September. Last night I found a 10k training plan that I liked and backed up the dates. To be ready by race date I have to start training June 25. Holy crap, that’s like a week and a half away! I was a bit overwhelmed at first, just because it’s been awhile since I’ve been consistently running. And the long runs are indimidating to me. The most I’ve run without stopping is 5 miles. Can I really run 8 miles (the longest run in my plan)?

Yesterday morning I went to a Lift & Run class at Fit for Fashion. It was a mix of weights and running drills. Great class, but I hate suicides with a passion. Then the last thing we had to do was sprint across the parking lot, then jog around the front of the building. Three times. It might not seem like much, but after an hour of moving and sweating this was the last thing any of us wanted to do. Our instructor saw our faces and said, “I know that each and every single one of you can do this…without stopping. Now you just need to tell yourself that you can do this.” And we did.

I always try to bring that encouragement with me on my runs. Running really is a very mental sport. I know my body can do it. I just need to believe that it can and trust it.

What races do you have planned for the future?