So we meet again, Monday…

Hope everyone had a great weekend! Jon and I went down to Cape Coral since we hadn’t been in a while. It was a typical weekend filled with family, friends, fun and food.

It started with an early rising on Saturday morning. Jon was off on an all day fishing trip with his brother and friends. And I was off to volunteer at Games Day at Special Populations with Jon’s uncle, cousin and sister. Special Populations is a city run program for adults and children with developmental disabilities. Jon’s aunt goes to their day program. It is really an amazing place. It’s like going to school, where they do all kinds of activities, go on field trips and have special events like dances or dinners. I’ve never heard of a program like it anywhere else, but it’s definitely something that every city should have. Each year they have Games Day, where they have different activities set up throughout the property with prizes for everyone. It was Armed Forces day so they had fun themed activities like Sargent Says, Grenade Toss, Target Practice and a fun obstacle course.

I was a group assistant where I helped take one group around to all of the stations. You can’t help but be happy around these people. They love life and see fun in everything. It was a great morning!

After Games Day Jon’s sister, Tori, and his cousin, Alex, and I went over to his uncle’s house for some pool time. It was too hot to lay out so I just dangled my feet and stayed in the shade while watching the pups have fun in the water.

And tried to keep my hands out of the cookie jar.

Then came a much-needed nap and then a much-needed burrito from Azteca. Tori and I then headed over to catch up with the boys, who were feasting on their freshly caught amberjack fish. Poor Jon was exhausted from being out in the sun all day so we made it an early night.

I did get to try this this weekend. 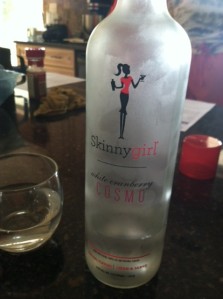 Tori said it “tasted like a sweet tart”, which it does. Not in a bad way though. It was good, but nothing I’d buy again. A bit too sweet for my taste, but I love that it’s only 100 calories a glass.

Sunday was pretty low-key. Lots of lying around except for washing cars. Then we did a shopping trip for groceries for a yummy dinner.

But first…we made lemon bars.

Neither Tori nor I had ever made lemon bars and we were combing ones we found from Martha Stewart and Williams and Sonoma (I always forget they have great recipes!). They were lookin’ a little odd to me before we stuck them in the fridge for an hour, but I crossed my fingers.

Dinner was curry chock full of veggies, leftover amberjack from the boys fishing trip and asian style tilapia piccata. Everything was so good! Curry a la Tori, grilled amberjack a la Jon’s grillmaster of a dad and tilapia a la Jon. A great mix of culinary efforts!

And those lemon bars? 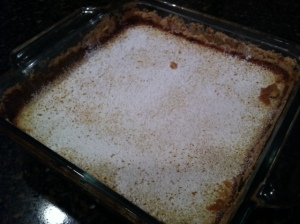 They turned out pretty darn tasty too.

What fun things did you do this weekend?

March already? I feel like everyone is saying that, but seriously the time really does fly.

Wednesday Jon and I went to our friend Scotty’s house for dinner with his girlfriend Olivia. He had been on a fishing charter all day and wanted to share the wealth 🙂

Fish tacos with homemade slaw and salsa. These were. so. good.

Thursday I joined a group from Junior League at Painting with a Twist. During March instead of a general membership meeting we do cluster events, which are fun things like wine tastings, spa night, movie night…and in this case, painting! I’d heard a lot about this place but have never been. I’ve had coworkers who have gone and their paintings turn out amazing. It’s really a fun thing to do with a group of friends or if you just want to unwind at the end of the day.

Once I got set up I poured myself some red wine and grabbed a tiny plate of cheese and apples. Here we go! So the deal is that everyone is painting the same thing. The finished painting is set up in front of the class and an instructor guides you through the whole painting. It’s really neat to see how everyone’s turns out. They’re all the same, but have their own flair!

I was freaking out a little with each stroke (hello perfectionist) but after a while I just went with it. I wasn’t too sure how I liked mine, but it’s grown on me 🙂 Even though I can’t seem to paint a straight line to save my life. I’ll definitely go back!

Friday, once we got off of work Jon and I headed to our friends Joe and Mandy’s house for dinner. Joe had been on the same fishing charter as Scotty so that meant more fresh fish! 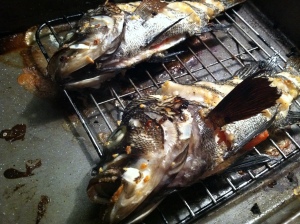 We picked at these guys along with roasted asparagus and roasted potato wedges. Yum!

Saturday I had to go into work for a few hours but before I did I had one thing on my mind. Food trucks!

Food trucks have been growing here in Tampa Bay and this is the second time the Tampa Food Truck Rally had come to visit our neck of the woods. Not sure if they’ll be back though…there was hardly anyone there! Then again it’s far back from the road with only a little sign. You kind of had to know they would be there. 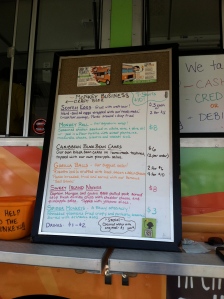 We first visited Monkey Fire Truck, which I’ve heard so many good things about. We got the gorilla balls (hehe) which were risotto balls with meat and bleu cheese. Served with a sauce that was like a thinned out jam. The ball itself was good, but not great. I did really like it with the sauce though…I’m a big fan of the sweet and savory combo. Next Jon went to get an Italian beef sandwich while I headed to The Killer Samich for a shredded pork slider. It had coconut and a ginger slaw on it. The meat was a bit dry, but overall I really enjoyed it! Jon’s Italian beef was really salty, kind spicy and really messy. Nothing to write home about. The last stop was to get an all natural frozen ice pop. I got the orange cream and it was fantastic! I craved another one for the rest of the day.

We were pretty tuckered out that night so we made it a night in with Chinese food and watched Shutter Island. I was afraid it was going to be scary, but thankfully it wasn’t (I hate movies that have things popping out at you). It was good but the ending was kind of expected.

Sunday we planned to get our usual dim sum, but the place was packed and we couldn’t even find a parking spot. No dim sum for us 😦 We decided to try this newer place downtown called Sab Cafe. It’s a mix of Thai and Vietnamese. 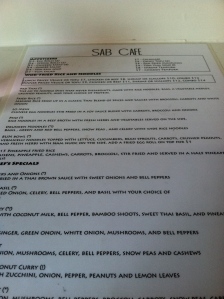 I ordered a Thai tea boba to start I kinda liked how it was served in a wine glass 🙂 It was too watery and not milky enough though. I added a packet of splenda, which helped a bit, but I only drank half of it. And the boba was a little too chewy…like it was old?

Jon started with the Tom Yun Goon soup, which is his favorite. The broth tasted like tomato soup and the shrimp were not the best. My entrée was the Bun Bowl, which is similar to the Beef Vermicelli I get at Pho Quyen. This only made me wish we were at Pho Quyen 😦 I liked it at first, but the more I hate the more I didn’t like it. There was nothing in particular that was bad…just didn’t hold a candle to what we normally get at our fav places.

Luckily, Jon made dinner that night to make up for it.

In non-food news I got new sneakers!

Finally. I’ve been wearing my current ones for waaayyy too long and with a Groupon to Feet First and a 5K coming up I thought it was the perfect time to get a new pair. Apparently I’m a pronator and walk more on the inside of my feet. These are Asics. And are my favorite color (purple)! I ran in them for the first time yesterday and they felt pretty darn good. Like I was running on a cloud. I also bought shoe inserts to help support my feet. You’d think they were trying to upsell you, but I have heard from numerous sources that it’s good to have inserts in addition to a good pair of shoes.

What are your favorite running sneakers? Do you have food trucks where you live?