So, I have a confession to make…

I’ve never been to a hibachi restaurant.

Apparently it’s one of those things that I should have done long ago and just never did. Like learning how to ride a bike. Ya, I don’t know how to do that either, but that’s a different story for a different day.

My friend Ashley has been particularly adamant about taking me to hibachi so finally on Friday, we went.

I love new experiences and was excited to go! Everything from the sky-high flames on the hot top to the food was excellent.

We went to Tsunami. We didn’t make a reservation, but only had to wait about 15 minutes. The place was bustling. 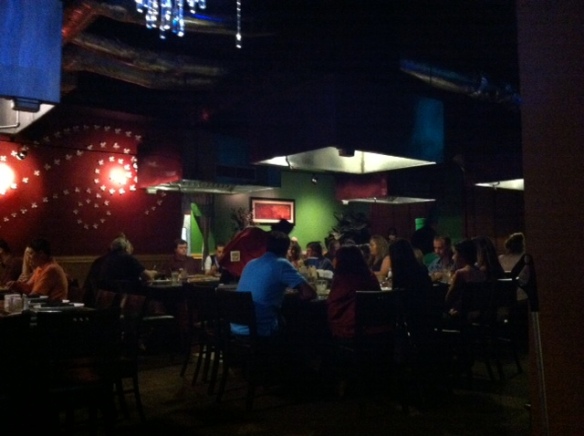 I like the idea of sitting in a family style set up. There was an adorable little boy across from us that we made faces at throughout the night. We were next to two families and while they were friendly no one seemed to strike up a conversation. Oh well!

Our meal started off with the traditional miso soup and salad with ginger dressing. Pretty typical, nothing mind blowing here. I also had a few pieces of Ashley’s sushi that she ordered, which was pretty good.

Then our chef came out and put on a little show.

Fire in the hole! 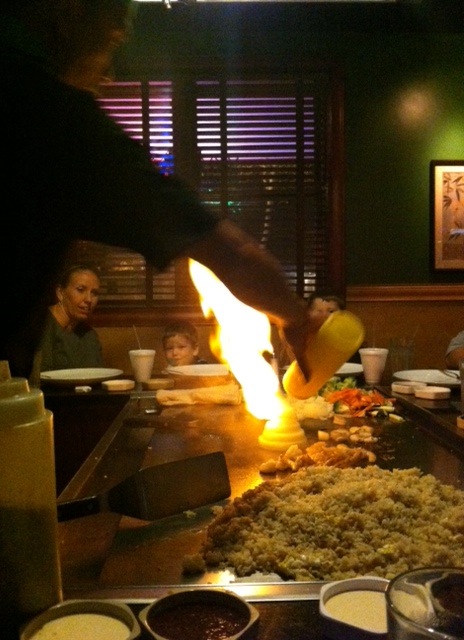 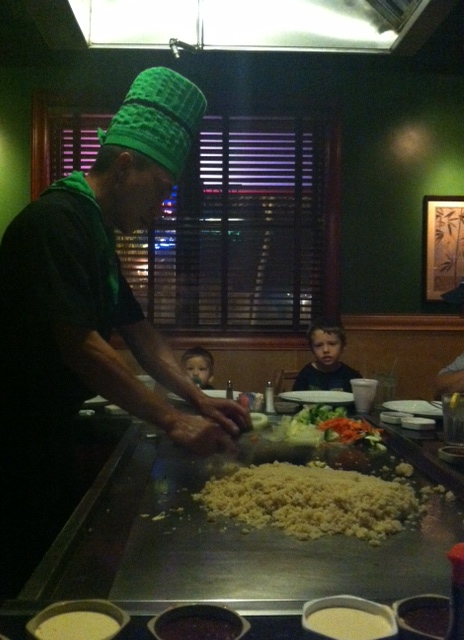 This huge bowl of butter kind of scared me. 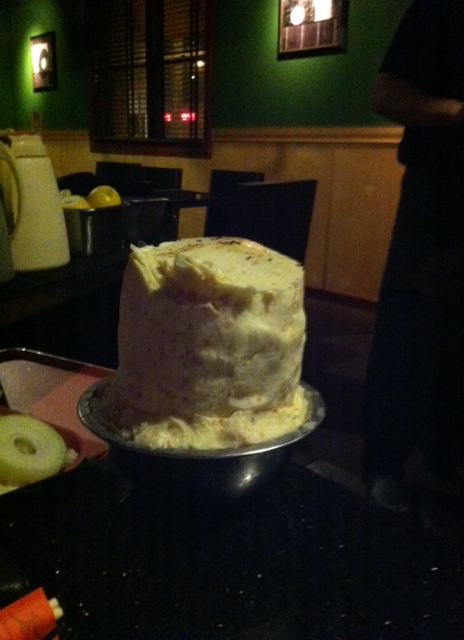 I had the shrimp and steak. The steak wasn’t my favorite, but I really liked the shrimp. I wasn’t a fan of the noodles (too greasy) but the rice was awesome! Loved the seasoning they added to it.

A LOT of food! 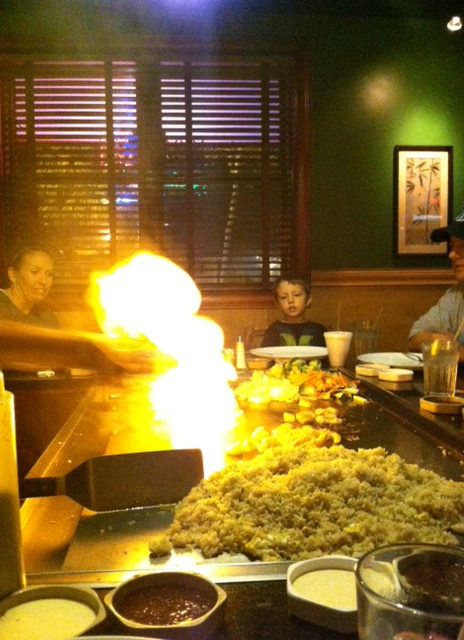 Have you ever been to a hibachi restaurant?

Saturday was a busy day. I’ve applied to be on the Junior League Board of Directors for 2013 and Saturday morning I went in for a “meet and greet”, which is pretty much an interview so the nominating committee can see how you’d fit with the positions that you want. I was uncharacteristically nervous, even though I knew most of the women and they were all so nice. They give you a list of questions ahead of time, but they asked a few I felt I wasn’t prepared for (I’m a person who doesn’t do well when caught off guard). Hopefully it still went well!

The rest of the day was spent cleaning! I sorted through some papers, got rid of some junk that had been sitting around forever. It felt so good to empty out our place some!

On Sunday, we had a fun day planned!

After bench presses and pull ups at CrossFit, I came home and Jon and I got ready for a drive over to Honeymoon Island in Dunedin. I’ve heard great things about Honeymoon Island, especially about the dog beach so we finally decided to make the hour drive and see what it was all about.

Luckily the drive wasn’t too bad and it was fairly easy to get to. There’s an $8 charge to get into the park, but since we were planning on being there a few hours I didn’t think it was too bad.

We parked, lugged all our stuff out (a beach bag, two chairs, an umbrella, a blanket and a cooler) and made the trek to the beach. I say trek because it was a 1/2 mile walk from the parking lot! Oi vey. It was unexpected, but once we got to the water we quickly found an open spot. There were a lot of people there, but not too many people that it felt overcrowded. 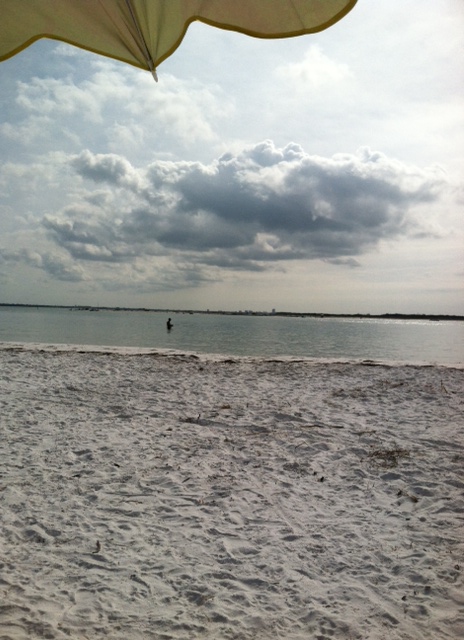 This was Maddie’s second time at the beach. Poor girl is still not a big fan of the water 😦 We tried to get her to swim, but eventually retreated to our umbrella for people/dog watching.

While we had a nice time, Jon and I both agreed we liked Ft. Desoto a bit better. It’s closer to home, cheaper and just as nice of a beach. Plus, dogs can be leash free. We had to keep a leash on Maddie, which was fine, but it gets all icky and she can’t run around as freely.

We left around 3 and decided to stop in downtown Dunedin for a bit. I had looked up pet friendly bars on Yelp and found Rosie’s Tavern. 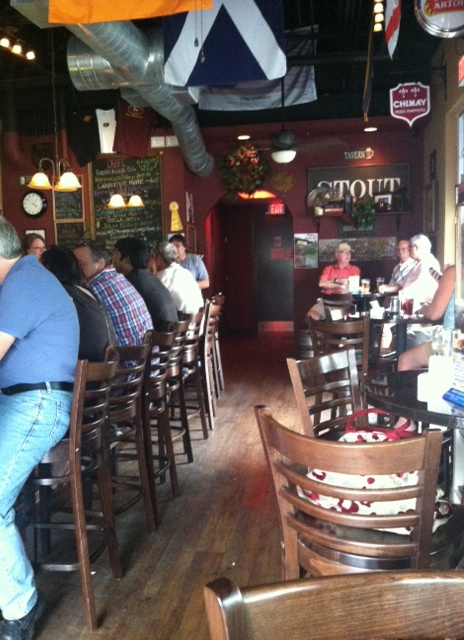 Rosie’s was such a cute place. What makes it different is that dogs are actually allowed IN the bar so owners are not restricted to stay outside, which is nice. The staff was super friendly and we chatted up some locals while we enjoyed our drinks.

Afterwards we walked along Main Street and checked out the store fronts and an art walk they had going on. Dunedin is so cute! I wish we were a tad closer so we could visit more often.

It was a delightful day indeed! So nice to get out of St. Pete for the day and explore more of what our area has to offer.

Have you had any fun day trips lately?