Looks like I’m playing a bit of catch up here…

If you all are familiar with the review site, Yelp, then you may know that they have Elite members. To become Elite all you pretty much have to do is send an email to your area’s community manager telling them why you’d like to be an Elite member. They look over your profile to see if your active, have good reviews, etc. and if they like what they see you’re in. Then you get invited to some pretty cool parties such as last Tuesday’s So Long Summer party at The Avenue in downtown St. Pete. I was glad to see an event on our side of the Bay and one at a place I already knew I liked.

We had the whole place reserved just for us Yelpers and the tables were adorned with fun Yelp merch. Everything from bookmarks to chapstick to sunglasses.

Everyone went with the summer theme and were donned in their best summer attire. And boy did you need it…doors were open and it didn’t seem like the ac was on cause it was a bit warm.

First things first…hunch punch! I love this stuff. Perfect mix of sweet with that hint of fizz from soda. It’s so refreshing.

We hadn’t eaten dinner yet so had our eyes on the food. We were told it would be passed around, but after a few minutes of not seeing any I decided to investigate. We went around back and saw that there was a mini buffet set up. We grabbed a few of the last wings, which were reaaalllyyy good. We waited and waited for more food to come out, but it was taking a while. We eventually left because we were hungry and needed dinner! There also wasn’t too much to do. We said hi to a few familiar faces and there was a fun photo booth and cornhole outside (in the heat!), but it would have been fun to have some cool games or contests going on. Overall though I was glad we went. Looking forward to another one!

Wednesday we had our friends Kyle and Jesse over for dinner. They brought their adorable dog Barkely over too so Maddie had a playmate for the evening.

Jon has made these before and they are oh so good. And oh so not healthy for you. Braised short ribs, fontina cheese, marinated onions all on fresh white bread from Fresh Market. Asparagus on the side for something a bit lighter 🙂

On Saturday we went to a friends end of summer party in Tampa, but before we headed up we grabbed dinner at the new La V in downtown St. Pete. It’s owned by the same woman who owns Thuy Cafe, our favorite place to get banh mi and boba tea. Once I heard she was opening a restaurant I’ve been so excited for this place to open. Usually we like to wait awhile before trying a new place so they have time to work the kinks out. But we were in need of a dinner place and Vietnamese always sounds good 🙂

The decor is really nice inside. It’s tastefully decorated with clean lines and has a slightly modern feel. Simple and classy. The service was shakey, which we kind of expected since they hadn’t even been open a week. But everyone was nice and apologized for things being kind of slow. It did take a while for our food to come out, but it was worth the wait. 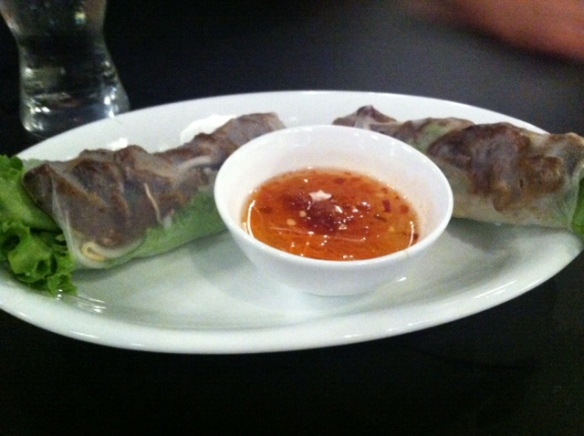 I had the La V Bun Bowl with beef, grilled shrimp and egg rolls. (There’s vermicelli under there.) It was wonderful. Fresh and flavorful. And just the right amount too. The meat was excellent…I just wish I had gotten more than two shrimp

Jon had the La V Rice Dish, which was pretty much mine, but with rice. He was a fan so you know it’s good!

On Monday we had the pleasure of attending The Jeff Norton Awards, which are an awards ceremony that recognizes the best actor, actress, director, etc. for local Tampa Bay theatre companies. 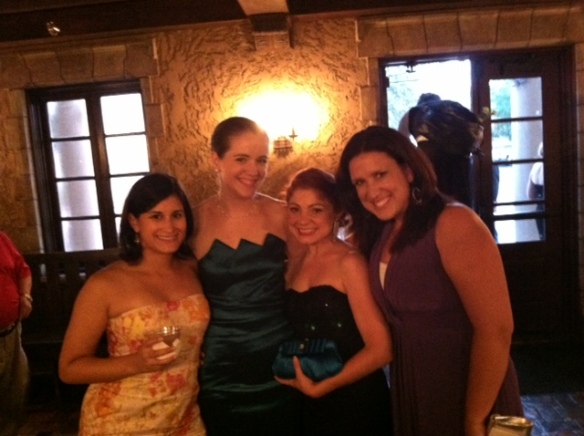 I was surprised at the little amount of people who showed up, but it was a very well done event. The host was hilarious, there were great snippets of performances and we got to see some friends and dress up. I’m writing a blog for Articulate on it and will post it when it’s up 🙂

After a 3 week hiatus I’m determined this week to get back on track with my race training. I’ve decided not to do the 10k I had planned in September so I’m really not that much behind in my training. I think every once and awhile our bodies just need a break and we need to give it to them. Then we can come back stronger!

We have the most perfect dog in the world. It’s true. She’s so sweet and loves everybody. She’s smart and overall just a good dog. Love.

Are you on Yelp? Are you an Elite member? Any good restaurant finds this week? Do you have an awards ceremony for local theaters?

2 thoughts on “Yelp, La V and The Jeff Norton Awards”