We’ve certainly packed Maddie’s first week with us with lots of experiences. 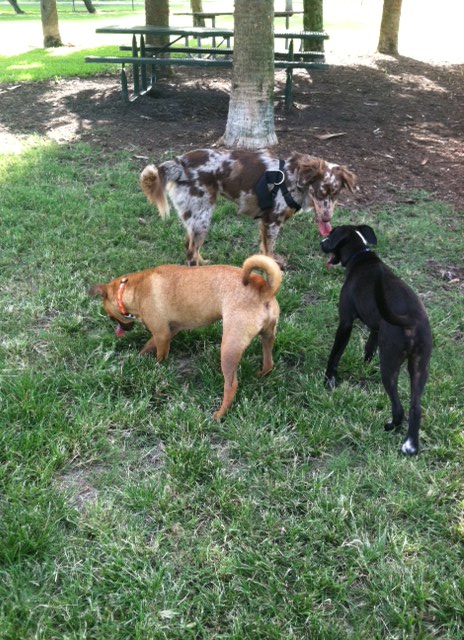 She LOVED the dog park. More and more dogs showed up and she had such fun with her new doggie friends. She is FAST. We may need to look into some agility training…

One of the things we’re thinking of is certifying her as a therapy dog. She is just SO sweet and great around people, kids and other dogs. Such a good temperament. Jon and I love volunteering and would love to have her be a part of that aspect in our lives. 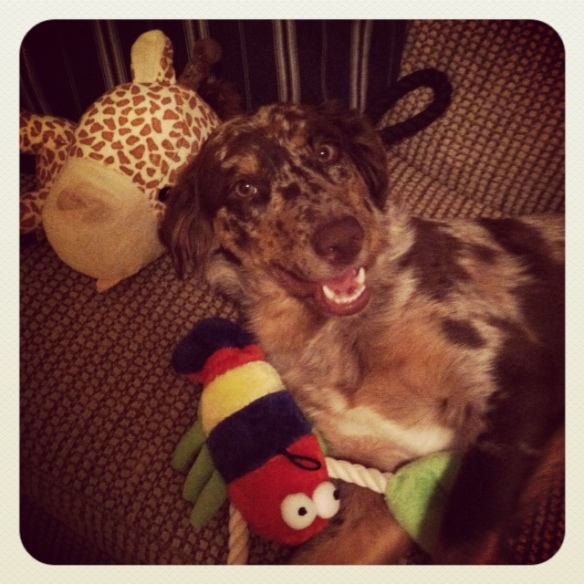 She loves her toys 🙂

We took her to Beer with the Bard with us on Thursday. The Ale and the Witch has a wonderful courtyard area and lots of people bring their dogs along with them. Very pet friendly place. Again, she had a ball. She got so much attention and just took in the scenery.

We also took her down to Cape Coral with us this weekend. Luckily she got along great with the other dogs. Everyone loved her and couldn’t stop petting her and telling her how pretty she is. I tell ya, this dog certainly has landed into a good life here 🙂 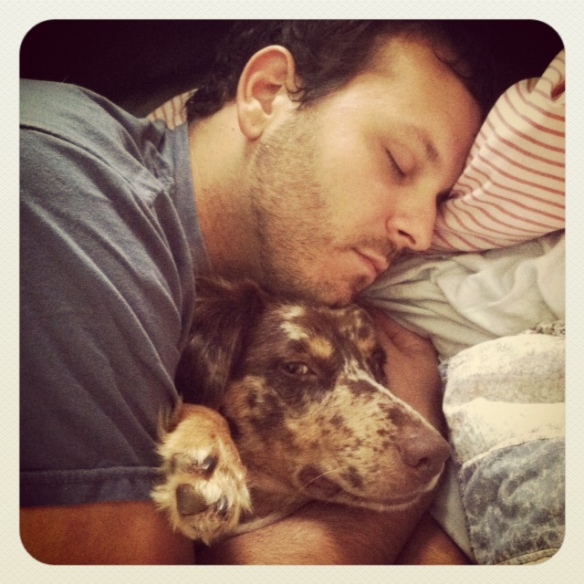 I am so in love with this photo.

We tried to go out on Jon’s brother’s boat on Saturday, but the weather wasn’t going to let that happen. We drove out to the channel, saw the looming clouds surrounding us, and turned right back around.

The pups still seemed to enjoy themselves.

We tried to get Maddie to swim in the pool, but she clearly has never been swimming before. We eased her in to get her used to the water, but I think it will take her some time to get into swimming. Maybe a beach would be better?

Later that night we had a big family/friend dinner outing to the best restaurant in Cape Coral, no joke. La Trattoria Cafe Napoli is a must if you’re ever in the area. The price point is reasonable, the atmosphere is lovely and the food is to-die-for amazing.

We started off with a variety of appetizers. Tuna Picadillo, Stuffed Plums with gorgonzola wrapped in prosciutto and Baked Goat Cheese. All delicious, but the stuffed plums stole the show.

For dinner I had the Ternera Tortellacci a la Castellana, which was handmade pasta with veal ragout, roasted garlic, plums, shallots and madeira wine. Simply divine, but not enough! I wanted more. Especially since we were such a large group (there were 10 of us) so it took a long time for dinner to come out and I was ravenous. I had little bites of some surrounding plates and all was wonderful. Unfortunately, Jon and his dad got the pork special and the pork was overcooked. I had a bit of Jon’s and the wine wasn’t cooked down all the way so it had a very strong flavor. Surprising, since everything we’ve ever had there was great, but I guess it happens every now and then.

This was another week, where my runs took a backseat. I think we’re still adjusting to our new schedule as doggie parents…so it’s been hard to schedule in a run after work and every time I’ve set my alarm early I’ve ignored it come a.m. This weekend I knew it was going to be hard to fit in my 8 miler since Cape Coral means late nights out with family and friends. I didn’t set an alarm Sunday and when I saw it was raining I thought I’d have to cut my run. But I looked at the forecast, which told me it was going to clear up so I laced up my shoes and headed out the door. Since it was later in the day and therefore more humid I decided to just do 5 miles. As soon as I started running and really felt the heat 5 miles turned into 4. And eventually 4 turned into 3. It felt like I was running through a sauna! Glad I got it in though. Now hopefully this week I can get back on track for my 10k training.

Sunday is family dinner night and we were celebrating August birthdays (Jon’s mom’s, his brother’s and mine). 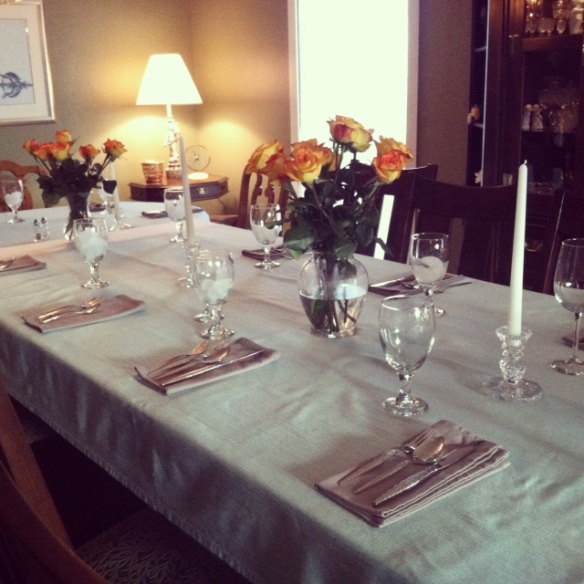 So we fancied up the dining room a bit.

And had a menu of beef tenderloin, mushroom rosemary risotto, roasted asparagus and grilled Cesar salad.

And Grouper nuggets for an app.

I helped on the risotto front.

I love making risotto. It’s easy and truly a labor of love. But man do you need some arm muscles to keep the stirring up! Jon’s sister, Tori, and I kept switching 🙂 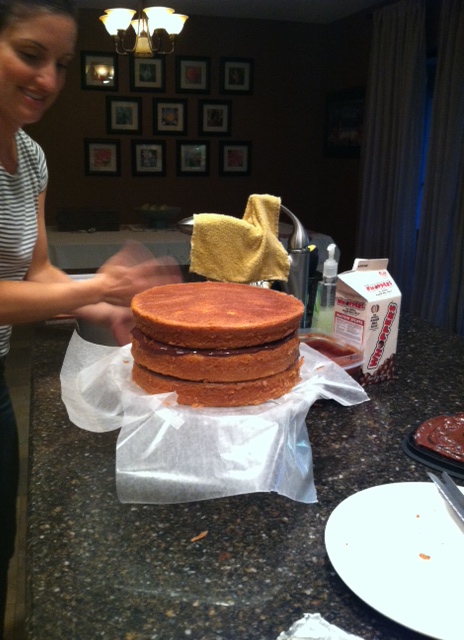 And for dessert Jon’s sister-in-law, Amanda, made a beautiful and delicious cake. I can’t remember what kind it was exactly, but the cake was made with malted milk (hence the whoppers as decoration on top) and chocolate ganache was the icing. SO good. We got sent home with some extra ganache and I can’t wait to swirl it on top of some vanilla ice cream. 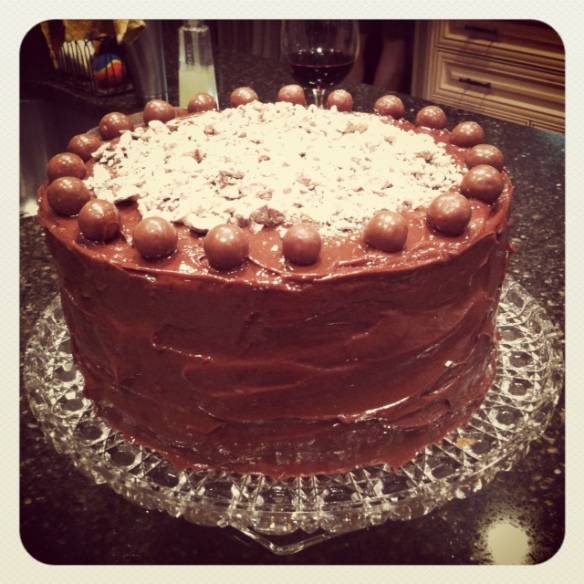 We also pulled out the Pictionary last night, which is a classic game in this household. It’s so fun to play with a big group and we all really get into it. 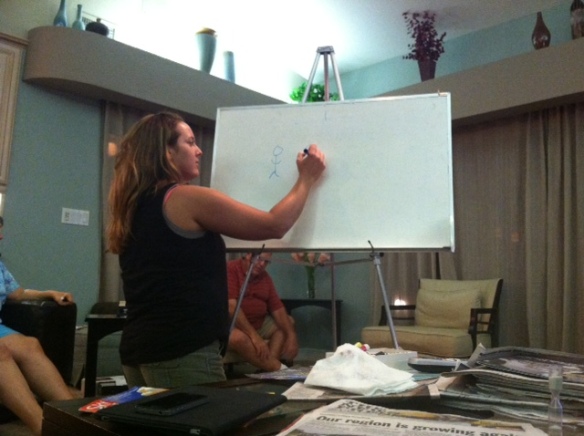 How was everyone else’s weekend?