I’m not sure what was up with me last week, but every day I got home from work I sat on the couch and promptly took a nap. I had no idea why I was so tired! As a result my training runs took an unexpected back seat for the week. I got in my two short 2 mile runs, but ended up skipping out on my 5 mile and 8 mile runs. I’ve learned to listen to my body…so while at first I got a bit upset that I hadn’t done my runs, I quickly reminded myself that my body is trying to tell me it needs a break.

I think we all need to remember that every now and then. Not just when exercising, but with life in general. Sometimes we’re so gogogo that we forget to take time to breath and just be with ourselves. I’m usually always busy during the weeks with errands and meetings and friends. But I always try to give myself one night where I have nothing planned except a date with the couch. It helps me to recuperate.

And after a break, I was more than ready to hit the treadmill for my 2 mile run on Monday. It was a short distance, but it still felt great. And I’m confident I’m going to rock it in the fitness department this week because of that much needed break.

Speaking of breaks, it’s been awhile since I’ve been in the kitchen. We had some leftover potatoes so I wanted to make a quick, easy and tasty dinner that helped us use them up. Via foodgawker I found this recipe for Sausage Kale Potato Casserole. It was goooood. And so easy! I did make a few changes though.

Recipe adapted from Poet in the Pantry.

First, slice 3 potatoes into thin slices. Grease a 9×13 pan and layer potatoes evenly onto the pan. Put a few thin slices of butter on top (I used 6).

While the potatoes are baking cook 1lb of sausage in a pan with a little olive oil. I used hot italian chicken sausage. It was organic and cheaper than pork sausage!

Once sausage is cooked put it aside and cook off the spinach in the sausage grease (I had to add a little bit of olive oil). Put aside. 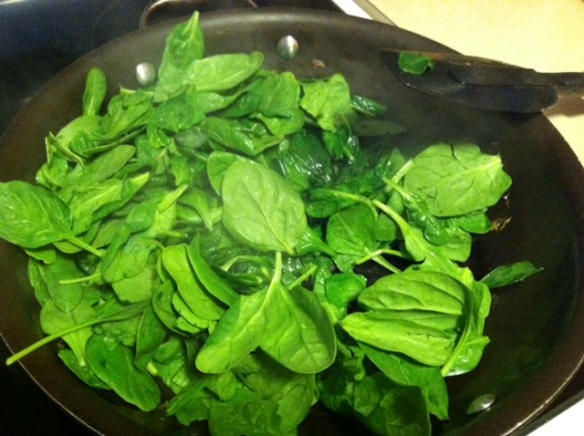 Pull potatoes out and layer spinach on top. Then the sausage. Then sprinkle cheese on top. Pop back in the oven for 10 minutes. Enjoy 🙂

This was simple and delicious. I am a sucker for following every single step in a recipe to the T, however the original recipe didn’t call for any kind of seasoning so I forgot to add any salt or pepper. It still tasted fantastic though. The sausage had a lot of flavor. I really wanted to use kale, but they were out at Publix so I opted for spinach. Still came out good. And we topped our plates off with squirts of Sirachi, which was a great add on!

Beer with the Bard is on schedule for tomorrow 🙂 It’s been a pretty low key week since we’ve been spending so much time with the new puppy. We’re going to take her out with us tomorrow and see how she does! She loves attention so I’m sure she’ll have a blast.

Have you recently felt that you need to “take a break”? How do you unwind during the week?