Whew! It sure has been an eventful week so far.

Every year, as a thank you to their employees, the company I work for usually comes up with a fun outing. This year one of the choices was a Rays game, where we’d get to hang out in an executive suite. Yes please!

My friend and neighbor, Ashley, and her boyfriend all work together (Ashley is in my same department!) so we carpooled. 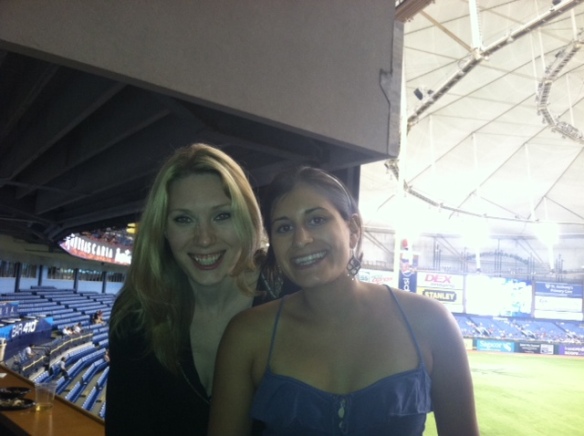 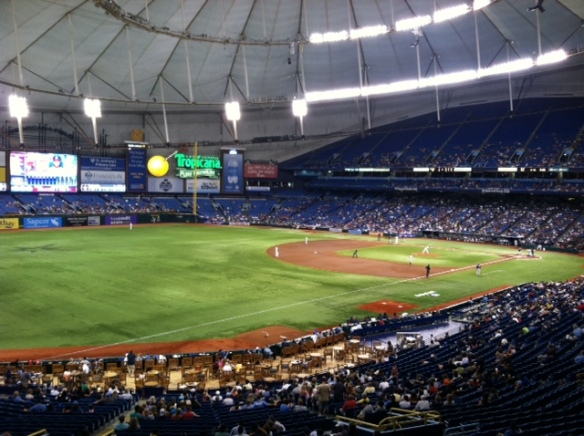 We were greeted with some yummy food. I had a mini pulled pork slider, which was awesome, and split a hot dog with Ashley. I eventually went back for more pork, it was so good!

There were a lot of people there and we got to meet some employees we had never even met before. That’s the best thing about company gatherings isn’t it? We were so busy chatting with everyone we barely watched the game. But it also wasn’t the best Rays game…we lost 😦

Due to a late night I fully ignored by 6 a.m. alarm, which was set so I could get my run in before work. So after work, it was straight to the treadmill, then after cleaning up, straight to dinner with Lora.

We had a Junior League meeting last night and there’s yummy burger place, the Avenue, just down the street from where it was so it was the perfect excuse to meet for dinner. Lora had the Mac and Cheesy with a vegan burger, which looked good. I got the Rasta Monsta, which had bacon, mango pineapple chutney, pepperjack cheese and a spicy sweet jerk sauce. I’m drooling just thinking about it again!

We also had another Junior Leaguer join us and she ordered the fried pickles, which were also really good. I haven’t had too many fried pickles in my day, but I’d have to say these were the best I’ve tried so far.

Luckily the meeting was short and sweet so I got to have a decent amount of downtime at home. Jon and I watched some Louis CK standup.

He’s one of the very few comedians that we like. It takes a lot to make me laugh and Louis CK does it for me!

Tuesday night I decided to give overnight oats in a jar another go and whipped up a batch for the next morning.

The first time I tried OOIAJ I wasn’t too impressed. I’m still not completely sold, but this batch was better than the first I made.

A couple handfuls of blueberries

And of course the yummy peanut butter at the bottom and around the edges…that is the best part!

Later that day I got another fabulous haircut at Number 9. I’ve been seeing Morgan the last few times and she rocks. Afterwards my mom and I had a nice dinner at Tijuana Flats and drinks at Starbucks. I’m not a coffee fan, but a chai tea latte always hits the spot 🙂

Tonight I’m looking forward to my only non-eventful night this week. Then tomorrow is a girls night with dinner and Brave! Also on the agenda is going to see Cabaret at freeFall and a Yelp Elite event. Going to be a fun weekend!