Wow, has it really been almost a week since I’ve posted?? Oops. Sorry folks, lots of fun has been happening over here!

When I last left you it was a day where I actually got to go into work late. With no food in the house I asked my friend Lora if she wanted to meet up for lunch. Off to Meze 119 we go!

This was my second visit and Meze didn’t disappoint. They’re proved their consistency. (At least with the food…our waitress didn’t know how to smile.)

Last time I was here, Lora got this and it looked so good I vowed to try it next visit. Tempeh bacon, panko encrusted tomato, olive tapenade, caramelized onions and syrian cheese on a whole wheat pita makes this sammie filling yet healthy tasting. Never had syrian cheese…loved it! It kind of tastes like mozzarella. The house salad was also bigger than expected and overflowed with my beloved sundried tomatoes. Love the vinaigrette they use also.

After work and a long Saturday ahead of me all I wanted to do Friday was drink wine, eat pizza and watch a movie. Only part of that happened. Pizza was nixed and we ended up getting Taco Bus. Aka the food I could eat every day for the rest of my life and be fat and happy.

The chochinita pibil burrito never gets old. But the butternut squash centro did. Don’t think we’ll get it again. We’ve gotten it a few times and finally realized we’re not big fans.

Saturday was one of the best days I’ve had in awhile.

I started off hugging strangers at Keep St. Pete Local’s Free Hug Fest. Sounds strange I know, but it was really a great thing. The idea formed from it being National Hugging Day and also KSPL’s goal to bring together the community and support local businesses. Basically residents could sign up for hugging shifts that were located throughout downtown St. Pete. You hold a sign that says “Free Hugs” and wait for people to ignore you, give you a nervous look or actually come up to you and ask for a hug. The mayor even gave out free hugs! I was a lone hugger on my block and while I felt a bit strange it was nice to start off the day with hugs! 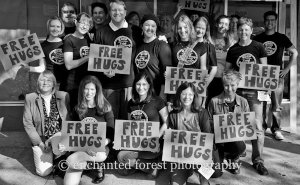 Then it was off to Edible Peach Patch, where I joined fellow Eckerd alums and St. Pete residents in building a garden for a local elementary school. I helped dig 3 feet into the ground. My arms were sore for 2 days.

Later that night Jon, my mom and I went out for dinner at Moscato’s Bella Cucina. I had been here once with my mom before and was so thrilled to have finally found an authentic Italian place. Unfortunately it wasn’t as good this time 😦 I had the Linguine Pesto and substituted angel hair and added grilled chicken. It was ok, but not as good as the Chicken Saltimbocca I had last time. Jon got a shrimp pasta dish, which was served in a small bowl and looked like a child’s portion. There was also very few shrimp and he said the pasta, although fresh, was undercooked. I was so excited to show off this place to him so this was definitely dissapointing. He also noted that the majority of the wines they had were not Italian. I wrote a review on Yelp though, and got a nice response from the manager. She said they’d take my comments into consideration and to also note that they would be having grand re-opening soon and were trying to get rid of all their current wines to make room for more Italian wines. I still have hope for this place! Plus my mom likes it so I know I’ll be back 🙂

Besides the food, I love the live music they have. There was a guy who knew the band playing and actually randomly sang a few opera songs. He was so good and it was so cool! The whole restaurant literally fell quiet while he was singing.

After dinner and after we dropped my mom off, Jon and I decided to go back out to The Ale and the Witch, which is by far our fav bar in St. Pete.

Sunday was uneventful unless you think furniture shopping is exciting. It’s not.

But Lamb Provencal is.

So. Delicious. I’m so spoiled.

Jon’s sister and a friend came to stay the night with us Monday since they were in town for a conference. This week is also his sister’s birthday so Jon made her a special dinner of homemade spinach pasta and lamb ragu.

I really should have turned on the light for this pic.

For dessert I picked up some goodies at Sweet Divas, which I’d been dying to try. I asked the woman there (who happened to be one of the owners) to just give me some of her favorites. I ended up with 4 different kinds of chocolates and 3 cupcakes. The chocolates did not disappoint. The only one I wasn’t a fan of was the dark chocolate grand mariner. Not sure why, just wasn’t my fav. But the dark chocolate salted caramel was definitely the table favorite. Also on the plate is a milk chocolate champagne (in the shape of a cork!) and a white chocolate key lime.

The cupcakes weren’t as good. I loved the frosting, but we all agreed the cake part was a bit dry.

Overall a fun and gluttonous night!

How has your week been so far?