It sure has been a whirlwind since we got back from our trip. The day after we got back I pretty much got slapped in the face by reality. We had to finish some projects in my mom’s condo (she’s moving down to FL in a week!), finish planning an upcoming fundraiser, plus catching up on projects at my full time job.

Thankfully, I’ve had some time for some fun 🙂

Like celebrating The Chef and mine’s 5 year anniversary. Our main celebration was obviously our trip to Portland, but we wanted to do a little something to celebrate on the actual day. So we brought caprese, liverwurst, Ritz crackers and wine to the beach. So fancy 🙂 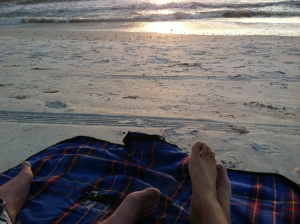 And going to downtown St. Pete’s Saturday Morning Market, which I hadn’t been to in forever. 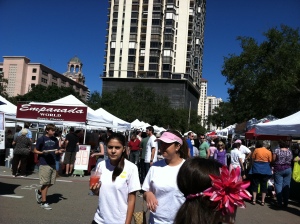 It changed locations quite awhile ago and boy has it grown! There are so many more local food vendors, it was almost overwhelming. The Chef and I stopped going to the market because he never thought the produce looked as good as it could. But I think I have to bring him next time to change his mind. I also wish I had bought some extra cash with me so I could snatch up some local honey and meat from a local farm.

I ended up getting a savory crepe from the crepe stand. I’ve had them once before and love them. They’re made from buckwheat and this one was filled with chicken, goat cheese, sauteed onions, mushrooms and onions. Yum.

I also got to see American Stage’s production of August: Osage County. I have been wanting to see this play ever since I first heard about it a few years ago, so I was so happy to see it locally. It was LONG at about 4 hours but it actually flew by. I loved the play itself…everything I hoped it would be. I love me some dark comedies 🙂 There were some actors I enjoyed more than others, but for the most part everyone had pretty fantastic performances.

Now, I will be the first to admit that I am not a cook. I’m very cautious in the kitchen. I’m always worried I’m going to mess something up. That’s why I love things that you can just throw in a bowl and mix up. Like tuna salad!

One weekend day I was found hungry and foodless…so I searched the pantry and fridge for something to whip up easily.

Here’s what came out of it.

To make a healthier tuna salad I used a half mayo and half greek yogurt mixture. Pretty much a tablespoon of each for each can of tuna. I used 3 cans of tuna total and it lasted for 3 meals. Then I basically went crazy with add ins 🙂 Dijon mustard, siracha, celery seed, red pepper, sundried tomatoes and relish.

It was fantastic! It even got The Chef’s approval 🙂 Although, he did say it needed fresh celery. Guess the celery seed wasn’t enough of a substitute!