Flavor, as defined by dictionary.com: taste, especially the distinctive taste of something as it is experienced in the mouth.

Chef Jeannie Pierola’s latest pop-up restaurant, KitchenBar is all about flavor…the flavor of meats, fish, spices, vegetables…how they taste by themselves and with each other.

Our visit to KitchenBar was my birthday dinner 🙂 In attendance was The Chef and two of my dear dear friends. The KitchenBar menu has a variety of dining options. You can choose from a five course tasting menu or order a mix of small, medium or large plates. Our table decided to order and share a few small, medium and large plates to really get a full sense of the menu.

Rilette is similar in to a pate in that the meat is chopped, salted and cooked slowly in fat until it’s able to be shredded and then cooled with more fat to form a paste. Ya, not very healthy 😉 The duck spread on grilled bread and topped with raspberry jam and mustard seed was the perfect marriage of salty and sweet with the mustard giving a small heat factor. 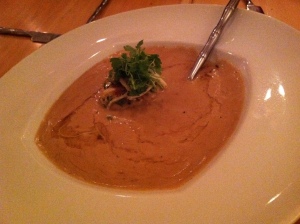 By the time this dish came out I was feeling pretty full. But after a few bites of this soup I had no problem polishing it off. Thick with rich cream, topped with the freshest of crab meat and sherry brown butter drizzled over the top. My only complaint would be less soup and more crab 🙂 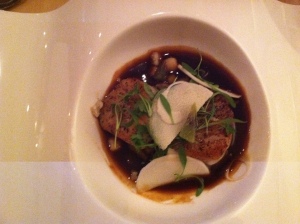 Two huge diver sea scallops in a star anise jus and tropical fruit compote. The fruit paired very well with the seared scallops. The jus was a nice addition, but was almost not needed. 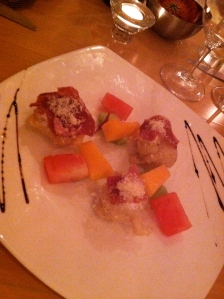 This was one of my favorites. Definitely not your average prosciutto and melon dish. Fresh prosciutto topped rosemary donuts and was sprinkled with parmesan cheese. Screw the meat…those doughnuts were heaven and I could have eaten those by themselves quite easily.

Another favorite. Plenty of tartare to go around the table and served with hericots verts and a nice mustard. Also on the plate were deviled eggs, which were nothing special, but I never pass up a deviled egg. The dish was also paired with french fries. Also nothing special, but they were good fries. Could have definitely lived without them.

I have never heard of Burrata before, but have heard numerous ravings about this dish on KitchenBar’s Facebook page. So it was a must order even though I didn’t know what to expect. Burrata is a type of Italian cheese…it’s mozzarella on the outside and mozzarella and cream on the inside. It’s very soft with a smooth, silky texture. Topped on top of an eggplant puree, tomatoes, basil and a lemon pine nut vinaigrette the dish tastes light and lemony. The cheese was also wonderful spread on top of some extra toasts we had. 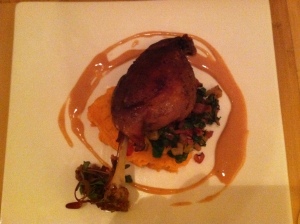 My other friend ordered the Black Grouper. This is the only dish I did not get a taste of. Partly because I was full. Partly because it was a dish that just didn’t appeal to me. Fresh grouper is aplenty in the right places in FL. And I’m not a big clam fan. However, I did taste a bit of bacon foam for the hell of it. Foam is cool and all, but I’m really feeling that it’s a bit pretentious? 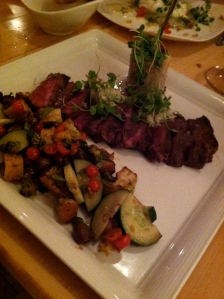 Another one of my favorite dishes of the night. The Chef ordered this as his entree and I shared. The medium rare steak was perfectly cooked with a charred edge. The side of panzanella was a perfect match, with crunchy croutons, micro tomatoes, cucumbers olives and capers. The dish was also served with bone marrow, which was another exciting highlight of not only the dish, but our whole menu of the night. Bone marrow is very gelatinous and has a lot of flavor…just think meaty butter. I spread some on a piece of steak. Yes, it was good. No, I did not wan more for a fear of instant artery clogging.

By the time our plates were cleared we were all wishing we had worn clothes that were one size up. But leave without dessert? It didn’t seem to be an option. Looking at the menu there was only one dessert that spoke to us. The Stone Fruit Tart Tatin came out as type of flakey pastry topped with a small scoop of bleu cheese ice cream. At first I thought the scoop of ice cream was a bit skimpy . But after a small bite I could see that that small scoop was all you needed. The bleu cheese flavor was VERY strong. As it melted on top of the tart it mixed with the honeycomb and almond flavors nicely. This was good, but not my favorite dessert ever.

With so many flavors throughout our meal we left fully satisfied and pleased not only with our food, but with the experience. My favorite part of dining out is always who you share your meal with. It helps form your final opinion of wherever you are dining. And with such great company at KitchenBar, I now have a wonderful memory of this once in a blue moon opportunity.