Cape Coral is…well…it’s Cape Coral. Residential and filled with shopping plazas it’s really not the most exciting place for twenty-somethings. When The Chef and I visit we struggle to find places to hang out. We usually end up at someone’s house or at a semi-decent bar in Ft. Myers…you really can’t be too picky in this area. But that being said there are a few select places that we do really enjoy.

This is the only bar in Ft. Myers that I will step into willingly. They have an extensive cocktail and wine list, which instantly makes this wino happy. The atmosphere is intimate and the decor is classic without being pretencious. The only thing that could be a bit better are the bartenders. Last time I was there I ordered a cote du rhone. He said they might not have, but that he suggested the rose if they were out. Um, champagne?? The Chef and our friends all had confused looks on our face and instead of nicely explaining his reasoning he got a bit snippy. Still don’t understand how a rose and a cote du rhone are similiar.

The Chef and I have yet to explore and find a good cuban place in Tampa Bay…I’m sure there’s one, espicially in/near Ybor City. But until that day comes Azucar has the BEST cuban food. We go there a lot of Sunday mornings after a long night with friends for their super cheap (under $5) breakfast. Why bother looking at the menu? The usual is the Cuban Sunrise, which consists of eggs, hash browns, ham or bacon, toasted cuban bread with a side of guava jelly and cafe con leche. I can’t drink coffee/espresso (heart palpitations), so The Chef gets two, but I usualy sneak a sip or two because it’s so sweet and creamy! They used to make their guava jelly, but for some reason don’t anymore. Still good, but not as foodgasmic as it used to be. Last time we were there I was in the rare mood for a sandwich instead, so I ended up with the media noche. Pretty much a cuban sandwich, but with sweet bread. A-mazing and truly satisfying.

Hands down the best mexican food I have ever put in my mouth, and easily the best I will ever eat short of going to Mexico. After first eating here The Chef and I have searched high and low for anything that compares. Taco Bus is the closest, but this is the type of food you dream of and crave for weeks. I always order the chicken mole burrito. And we always get about 6 tacos pastor. These ain’t no hard shell Taco Bell tacos…this is the real deal. Corn tortillas with meat, cilantro, onion and radish. That and a drizzle of your hot sauce of choice and you’re good to go.

There are an abundance of thai places in St. Pete, but this place beats out all of them. You think to yourself, it’s just Thai…but once you’ve been here you’ll see how good Thai food can really be. It’s not just an alternative to Chinese take out. The decor in here is also impressive. I normally find thai restaurants oddly tacky with misplaced decorations. But this place is orderly and nicely decorated with intimate lighting. Best thing ever? Kanom Bieng, which are thai crepes stuffed with minced shrimp, fresh shredded coconut, bean sprouts and crushed peanuts. SO good. I’m literally going to bring their menu to our Thai go-to place here in St. Pete and demand they add these to the menu. Our entrees were Bamee Hank, which are egg noodles with bean sprouts, crushed peanuts and either roasted pork or shrimp. We went with roasted pork and it was de-lic-ious. It’s like gourmet lo mein 🙂 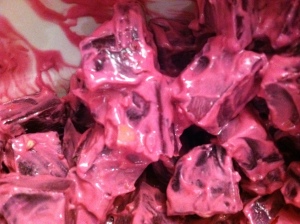 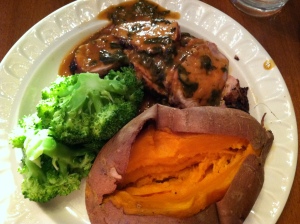